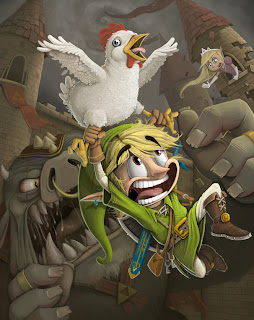 You kids can keep your fancy loftwings. Back in my day (1764 AD) the only way to catch some air in Legend of Zelda was to jump off crap holding a chicken.
...or hover boots, or have a weird giant owl carry you around, I guess.


This was originally going to be a 25th anniversary piece for the series, but after messing around with it for a little bit, I put it aside and forgot about it for a little while (9 months). I'm sure it's fine though. People celebrate 26th anniversaries right? RIGHT?!? 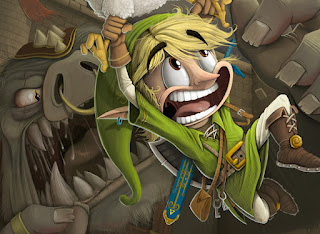 Anyway, this is my little tribute to a series that made me what I am today: Pale and covered in chicken scratches.
Posted by Dave Armstrong

And Justin I really appreciate you sharing my piece. I love your blog.

is an illustrator who hails from the foothills of central Ohio. Cold winters and thirty flapjacks a day have made him tough as nails and big as all outdoors. He was raised by bears and won his drawing ability in a card game with a witch.